Electric vehicles (EVs) have higher repair costs and longer repair times than internal combustion engine (ICE) vehicles, and are more likely to be returned to the shop for further work, according to the July trends report from CCC Intelligent Solutions.

The report, “Electric vs ICE Vehicles: Unpacking Repair Cost Impacts,” contains CCC’s analysis of two subsets of vehicles: small non-luxury models and mid-size luxury SUVs. In both cases, CCC considered cases where the same model was available as an EV or ICE vehicle, or where an ICE vehicle with a similar body style was available for comparison to a model produced only as an EV.

CCC found that both subsets of EVs had a higher average repair cost with a higher share of losses falling in higher repair cost dollar bands. Total cost of repairs averaged $4,041 for EVs, against $3,191 for non-EV models among small non-luxury cars. Among mid-size luxury SUVs, the difference was even more pronounced: $8,037 versus $5,242.

The higher costs, CCC concludes, are likely due to greater use of OEM parts and more repairs requiring operations like scans and calibrations. 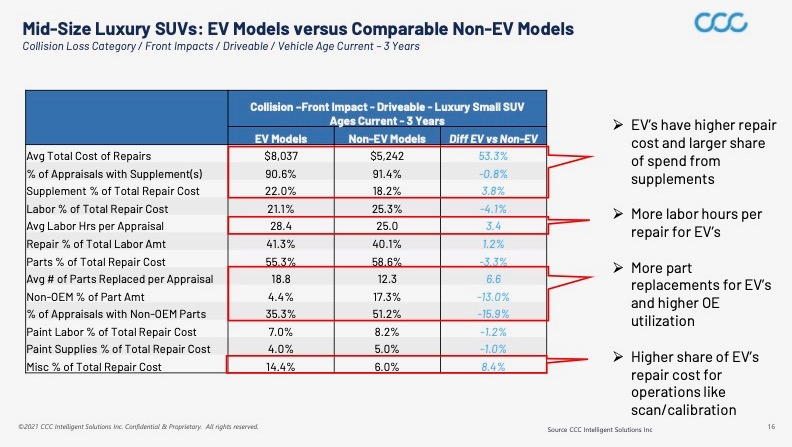 That dovetails with a Forbes Advisor analysis released last week, which found that an EV costs about $100 more per year to insure than a similar ICE vehicle. Forbes said its analysis of data from Quadrant Information Services shows that the average annual premium for EVs is $1,889 versus $1,786 for an ICE vehicle.

According to the CCC report, for mid-size luxury SUVs, just 4.4% of parts used came from the aftermarket compared with 17.3% for non-EV models. A higher percentage of non-OEM parts were used in repairing non-luxury cars, 12.1%, though that was still well below the 30.5% aftermarket part use for non-EVs. 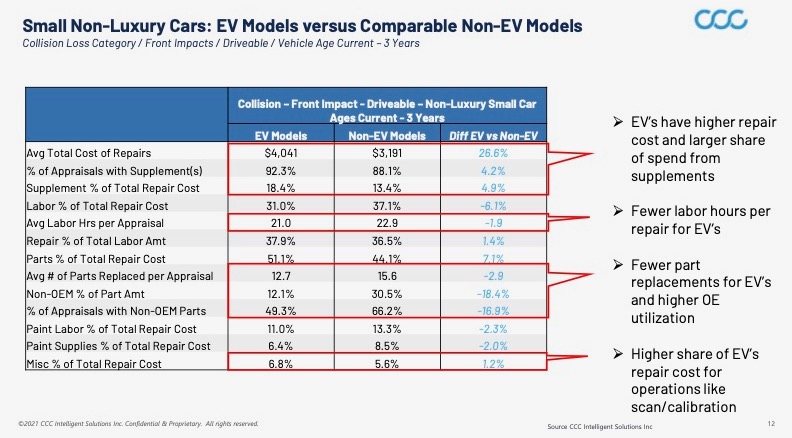 Parts prices are generally higher than average for EVs, though below those for all luxury vehicles. For example, the average price for a front bumper cover was $565 for an EV, $440 for a non-EV, and $866 for a luxury vehicle.

“With many of the EV models equipped with ADAS [advanced driver assistance system] technology, their repairs more often include operations like scan and calibration,” CCC says. “The G-forces sustained during an accident can cause a ‘concussion’ inside high-voltage batteries. Repairers may need to conduct pre-repair and post-repair scans to monitor the battery cells and temperature to avoid potential for fire.”

Average labor hours per repair were slightly lower for non-luxury EVs than for non-EVs, at 21 versus 22.9, but higher for luxury SUV EVs at 28.4 versus 25. However, for both subcategories, labor as a percentage of overall repair costs was lower for EVs than for their ICE counterparts.

EV repairs had a higher percentage returned to the shop for additional work after the customer picked up the vehicle, CCC said, a factor that “likely led to lower overall net promoter score for the EV models.” Thirteen percent of luxury SUVs and 8.9% of non-luxury cars were returned, compared with 8.4% and 9.5% of their non-EV equivalents, according to the report.

Fully half of all claims in which a battery pack replacement was necessary were deemed a total loss, CCC said. Of the remaining 50% that were repaired, 46% were vehicles with a primary impact of the undercarriage, where the cost of the battery pack alone averaged $15,000.

“In general repair of an EV is not considered to be more difficult than repair of ICE vehicles,” CCC said, though it listed a few “key considerations” for EV repairs:

Susanna Gotsch, senior director and industry analyst for CCC, provided Repairer Driven News with examples of the tools needed for repairing EVs, and it’s an extensive list: insulated hand tools, wheel dollies to move vehicles around the shop to avoid the movement of the vehicle powering the battery, a category III volt-ohm meter rated to 1,000 volts, battery charging equipment, non-metal workbench, special lift fixture to remove the battery, scan tools, lift and hoist for an EV-dedicated service bay, forklift, special gloves and eye equipment for service technicians and other PPE, a designated space to store EV batteries after they’re removed to reduce the risk of the release of toxic chemicals or fire/explosion, a ‘clean room’ for aluminum repair, specialized frame measuring systems and rivet guns, and welders and resistance spot welders. EVs must also be moved about via flatbed and not towed, Gotsch added. 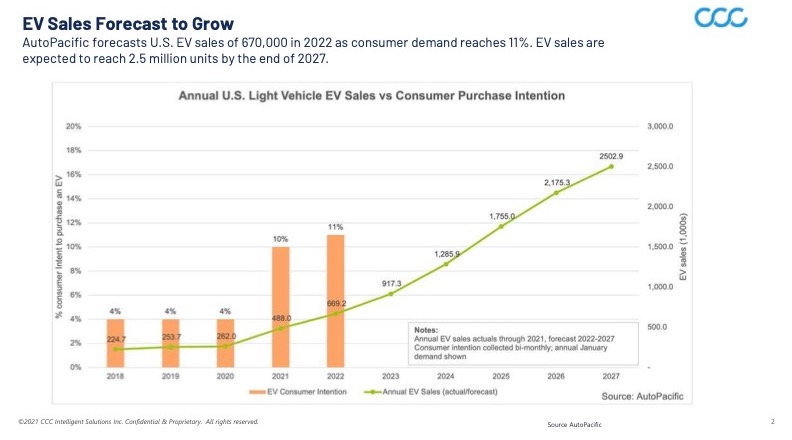 The report also examines battery-electric vehicle (BEV) sales in the US, finding that they’ve “ramped up sharply,” rising from just 1.5% of all new light vehicle registration in 2020 to 4.6% in Q1 2022.

Despite this, EVs “still account for a relatively low share of all registered vehicles and subsequently a low share of auto claims data to date,” CCC said. For example, BEVs accounted for just 0.86% of overall claim volume in Q1 2022, though that’s a significant rise from the 0.6% recorded in 2021.

Since March 2021, when AutoPacific began asking consumers why they intended to buy an EV, the top three reasons have consistently been “charging is cheaper than fueling” (80%-plus), “an EV is better for the environment” (73%), and “EVs are the way of the future” (75%). 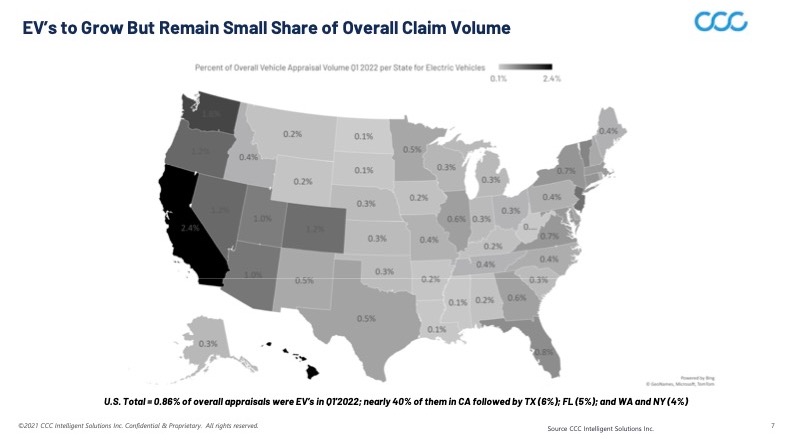 EV adoption varies from state to state. California continues to lead in terms of EV share of new vehicle registrations with EVs accounting for nearly 15% of all light vehicle sales there in Q1 2022; that’s roughly 39% of total EV sales nationwide, the report says. As a percentage of all appraisals, EVs ranged from a high of 2.4% in California to 0.1% in Louisiana, North Dakota, Mississippi, and South Dakota.

Tesla continues to dominate the EV market, though other OEMs are taking share, CCC said. Tesla’s share, which peaked at 79.4% in 2020, dropped to 69.95% in 2021 and 72% in Q1 2022, the report says. As other OEMs enter the market with a variety of body styles, such as pickup trucks and SUVs, Tesla is expected to face greater competition, it says.

With OEMs concentrating on the upper end of the market for their EV offerings, it follows that the majority of EV damage claims are for luxury models. CCC found that vehicles valued at $40,000 and up accounted for 82.8% of all claims, with vehicles between $40,000 and $50,000 representing the largest segment at 32.8%.

Weight up and braking improved

Many EVs weigh more than their ICE counterparts, the report says. It notes that, according to Insurance Institute for Highway Safety/Highway Loss Data Institute (IIHS/HLDI) data, “the added weight in EV and hybrid vehicles means passengers are less likely to be injured in a crash than people in otherwise similar gas-powered vehicles.”

However, pedestrians who are struck by EVs tend to fare more poorly, the report says. It cites a 1998 study of pedestrian fatalities conducted by researchers in Oxford, England, that found “the principal determinant of death is the weight of the vehicle concerned” and that “injuries to all regions of the body increased with [the] age [of the pedestrian] and with the weight of the vehicle in the collision.”

Many EVs demonstrate good braking, thanks to their regenerative braking systems, the report notes. It also credits a number of EV manufacturers for having already met the voluntary commitment to equip their vehicles with automatic emergency braking (AEB) systems.

“In many cases EVs are the poster child for growing vehicle complexity – with many equipped not only with numerous driver assistance features, but also with connectivity and telematics features,” the report says.

For a full copy of the report, visit https://cccis.com/news-and-insights/insights/electric-vs-ice-vehicles-unpacking-repair-cost-impacts/